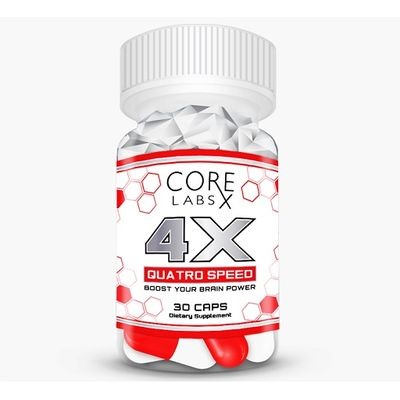 Revange 4X Quatro Speed is a dietary supplement containing a rich complex of ingredients with a stimulating, nootropic and thermogenic effect.

4X Quatro Speed is addressed to people who need energy boost to study, work or life and don’t want to reach for illegal products, such as Adderall. Taking into consideration thermogenic properties of some ingredients, it may also be used to accelerate fatty tissue reduction.

Complex influence on the nervous system
We will find in the preparation many stimulating substances with similar, but not identical profile of effects, which in combination, disclose much wider possibilities than in isolation.

We will also find here precursors for building neurotransmitters and nootropic agents, which will take care not only of high physical efficiency but also mental capabilities, improving memory, concentration and the ability to assimilate information.

The whole package is supplemented by the presence of the components optimizing assimilability of all active ingredients and having antioxidant effect, which maximizes benefits.

Additional thermogenics effect
The main effect of this preparation is the stimulation of the nervous system, however, the profile of the ingredients’ effect is also beneficial to people who want to lose some extra kilograms. Increased catecholamine burst, more efficient release of lipids from adipocytes, inhibition of appetite and huge energy, which forces performing more activities are decidedly the effects that positively influence the silhouette quality.

Revange 4X Quatro Speed is recommended to people who want to maximally increase the possibilities of their bodies and minds. It may be used both before training and before planned mental activity, e.g. work or study. Additionally, it may also support the process of fatty tissue reduction.